A Chat with Charlie Higson 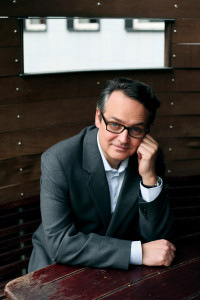 My guest this week is Charlie Higson, one of the top teen horror writers in the UK. He’s the author of the million-copy-selling Young Bond series that began with SilverFin and was followed by Blood Fever, Double or Die, Hurricane Gold and By Royal Command. All five novels entered the children’s bestseller charts in the top five. He’s also written much scarier books, including the truly creepy THE ENEMY and THE DEAD. Those books received well-earned critical and commercial success. Charlie’s novels have been translated into over 24 different languages. Charlie has a long and successful history with British television, including Saturday Live, the Harry Enfield Television Programme, The Smell of Reeves and Mortimer, Shooting Stars, Randall and Hopkirk Deceased, the film Suite 16, Swiss Toni and of course, the Fast Show.  More recently Charlie co-produced the controversial and award-winning spoof radio series Down the Line for BBC Radio 4, which became the television comedy series Bellamy’s People, on BBC 2.  Charlie has also written successful adult novels, including four thrillers, KING OF ANTS (1992), HAPPY NOW, (1993),  FULL WHACK (1995) and GETTING RID OF MR KITCHEN (1996).  He lives in London.

JONATHAN MABERRY: Charlie…thanks for taking time to chat with me about horror for teens. Let’s jump in with the key question. What scared you as a kid?

CHARLIE HIGSON: I remember as a child having nightmares in which my mother would turn into a witch and chase me around the place.

CHARLIE HIGSON: That’s scary – people changing on you. That’s the premise of The Exorcist, The Evil Dead and most Zombie Films- that the person you most love is now a monster. 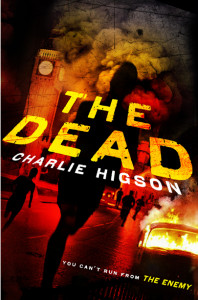 JONATHAN MABERRY: THE ENEMY is a kind of zombie story. How old where you when you saw your first zombie flick?

CHARLIE HIGSON: I first saw Night Of The Living Dead when I was at University in the late 70s. A friend and I put on an all night horror screening. Back then, in the days before video, DVDs and the Internet, if you wanted to watch horror movies that weren’t on TV or in the cinemas, you had to rent prints of them and screen them yourself.

JONATHAN MABERRY: You weren’t a kid by then. What was your reaction?

CHARLIE HIGSON: NOTLD scared the pants off me, it was the first cannibal zombie apocalypse film I’d ever seen (and the first ever made) and zombies became, for me, the scariest of all the movie monsters.

JONATHAN MABERRY: Do those films still creep you out?

JONATHAN MABERRY: Why’s that? How has fear changed for you as you’ve gotten older?

CHARLIE HIGSON: I guess as you get older reality starts to frighten you a lot more than fantasy and I’ve found that since having children my appetite for horror has diminished. The fear that one of my kids might get beaten up, or seriously ill or hurt in an accident brings me out in cold sweat. Space aliens, demons, ghosts, monsters from the deep, vampires, and – it has to be said – zombies frighten me less so.

JONATHAN MABERRY: Zombies are still scaring a lot of people, though. And they’ve become the go-to monster when speculating on the end of the world as we know it. 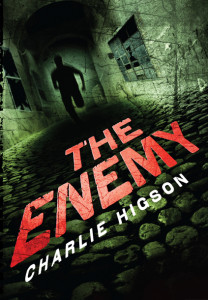 CHARLIE HIGSON: It’s amazing how many teenagers have detailed zombie survival guides worked out and yet have zero interest in politics, economics and sociology. That being said, I think it’s always been people that frighten me the most, and zombies are people, albeit dead ones.

JONATHAN MABERRY: A running topic of discussion here on Scary Out There and in the horror community is the fact that some critics have voiced concerns about writing scary stories for teens. Agree or disagree?

CHARLIE HIGSON: Come on, this is a non-starter as an argument, isn’t it? As if there haven’t always been scary stories in the world. From the ultra violent and horrific Greek myths and legends (check out Prometheus, Arachne, Oedipus for starters), through The Bible, Beowulf, Dickens, Poe, Frankenstein and Dracula…

JONATHAN MABERRY: Some might argue that those stories weren’t intended for—

CHARLIE HIGSON: Don’t tell me that these aren’t stories for ‘teens’, because the idea of publishing specific books for teens only came about in the last 20 or so years. Before then kids would go straight from Charlotte’s Web to the likes of Mickey Spillane, James Herbert and Flowers In The Attic. I mean, even many of the fairy tales we all grew up on are horror stories.

JONATHAN MABERRY: I doubt many adults have read the original versions of the fairy tales. They grew up on the sanitized Disney version. 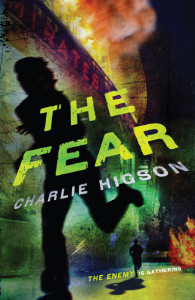 CHARLIE HIGSON: Right. Hansel and Gretel tells the merry tale of two small kids who are abandoned in the woods because their parents can’t afford to feed them, where they are then captured by an old woman who fattens them up to eat them, but they force her into an oven and fry her.

JONATHAN MABERRY: Not exactly Dr. Seuss. So, why have we been telling these kinds of stories for so long?

CHARLIE HIGSON: We love to be scared, we love to confront our darkest fears, we love to stare into the abyss daring ourselves to jump off, and horror is a great way for teens to come face to face with some of the nasty things in the world – like death, and diseases and ageing and violence and change and the visceral vileness we all have under out skins – on a fantasy level that they can cope with.

JONATHAN MABERRY: So you don’t see a moral conflict?

CHARLIE HIGSON: Most horror stories are pretty moral. It’s true there are some books out there in which the writer is trying to do nothing more than gross the reader out, but teenagers know their own limitations. You can always stop reading a book if you think it’s too intense for you. You can’t switch off real life in the same way, so it helps if kids learn a little bit about fear and how to deal with it.

JONATHAN MABERRY: Can you conjure a useful definition of ‘horror’

CHARLIE HIGSON: Hmm. I’m not sure I can! At least I’ve never tried before. All of the above examples could be described as horror if you had the fancy, even the Bible. The Book Of Revelations is the template for much supernatural monster horror, and the Old Testament is littered with grisly deaths, plagues and massacres. In fact you could argue that without the Bible’s insistence on the dead being able to rise from the grave we might never had had Dawn Of The Dead, Shaun Of The Dead and World War Z. I guess, when you boil it down to its essence, horror fiction is fiction whose primarily aim is to scare the living shinola out of you. And if it doesn’t do that, its just toothpaste.

CHARLIE HIGSON: I’m not sure there is a huge difference, really. Many ‘adult’ writers like Stephen King have always been enjoyed by teens (as are James Herbert, Poe, and the rest) and at the same time a lot of adults enjoy ‘teen’ books like my own.

JONATHAN MABERRY: Is there a difference from the writer’s perspective?

CHARLIE HIGSON: The only difference for me is that when I’m writing for teens I tone down the language and use less swearing and profanity, and I steer clear of any explicit sex, or any kind of sexual violence. Actually, I think this is one reason why so many adults enjoy teen books – they don’t all want to constantly read about extreme sex and be assaulted by foul language. 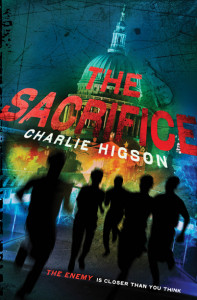 JONATHAN MABERRY: THE ENEMY is the first in a series of horror for teens. What’s it about?

CHARLIE HIGSON: The premise is that a disease has hit the planet that only affects people over the age of sixteen. So teenagers are trying to survive on the post-disaster streets of London, scavenging for food and building themselves some kind of new world without adult help and protection. The disease has killed most of the adults outright, but the unlucky few live on in a badly diseased state and behave like textbook cannibal ‘zombies’, preying on the young. There are layers of allegory to keep the professors happy, and lots of gore and cannibalism for the kids.

JONATHAN MABERRY: Is it a trilogy…?

CHARLIE HIGSON: It’s going to be a 7 book series and builds into an epic saga.

JONATHAN MABERRY: So, no other immediate plans for YA?

JONATHAN MABERRY: Teens always want recommendations for what to read next. What would be on your must-have list?

CHARLIE HIGSON: I like my horror to be horror. I’m not a fan of the supernatural romance strand, so that rules out a lot of books on most top 10 YA horror lists. Also, YA as a publishing category is fairly new in the UK and most American YA authors are not published here. So there is a huge wealth of American talent and books that I’m not familiar with and there is not yet a similar pool of UK YA horror writers. So I’m going to cop out and suggest 2 adult books that teens could happily read and one by a very popular UK author.

CHARLIE HIGSON: The Shining by Stephen King is perfect for all ages, really, and this seriously scary book is far superior to Kubrick’s slightly hammy film.

JONATHAN MABERRY: I agree. I’m not in the camp of folks who think Kubrick did the book justice.  What’s the other American book you recommend?

CHARLIE HIGSON: The Drive In (1&2) by Joe R Lansdale. About a group of teenagers trapped in a drive-in by supernatural forces. Again, not technically YA, but a real blast for older teens, a mash-up of 60s style monster movies and weirdo horror. Cartoony, schlocky, funny, horrible and slightly crazy.

JONATHAN MABERRY: Absolutely agree. I interviewed Darren a couple of weeks ago.

CHARLIE HIGSON: Shan is one of the UK’s most popular horror writers for kids and this is the first book in his epic new zombie series.

JONATHAN MABERRY: Charlie…thanks so much for sharing your insights. Best of luck with the rest of the ENEMY books. I meet a lot of kids at school libraries around the country and they positively devour those books.

Tune in next week when my guest will be Ilsa J. Bick, award-winning author of dozens of short stories and novels, including the critically acclaimed Draw the Dark (Carolrhoda Lab, 2010); Drowning Instinct (Carolrhoda Lab, 2012); Ashes, the first book in her YA apocalyptic thriller trilogy(Egmont USA, 2011) and Shadows (2012); and the just-released The Sin-Eater’s Confession (Carolrhoda Lab, 2013).