A Chat with Holly Black 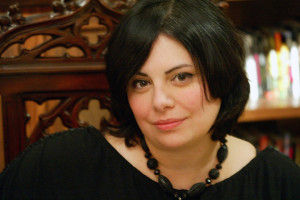 My guest this week is Holly Black, author of bestselling contemporary fantasy books for kids and teens. Some of her titles include The Spiderwick Chronicles (with Tony DiTerlizzi), The Modern Faerie Tale series, The Good Neighbors graphic novel trilogy (with Ted Naifeh), the Curse Workers series, Doll Bones, and her new dark fantasy novel, The Coldest Girl in Coldtown. She has been a finalist for the Mythopoeic Award, a finalist for an Eisner Award, and the recipient of the Andre Norton Award. She currently lives in New England with her husband, Theo, in a house that (I’m reliably told) has a secret door.

JONATHAN MABERRY: Holly, thanks so much for swooping by to chat with me. With the blog we’ve been exploring the nature of fear, so let’s jump right in. What scares Holly Black?

HOLLY BLACK: Everything scares me.

JONATHAN MABERRY: Nice. Anything in particular?

HOLLY BLACK: Zombies, especially, but I am very easily frightened.

JONATHAN MABERRY: Do you know why?

HOLLY BLACK: I grew up in a creepy hundred-year-old Victorian house, like the house in the Spiderwick Chronicles, which my mother believed was haunted.

JONATHAN MABERRY: Was it? 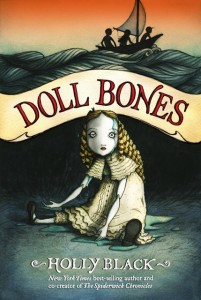 HOLLY BLACK: My great grandmother had lived in the house for most of her life and my mom told stories about how she used to play with a ghostly boy in the attic. Whenever she lost something she’d yell for the ghost to bring that thing back. One time, I swear I sat on a sofa for an hour, not moving, because I thought there was a ghost in the other room.

HOLLY BLACK: It turned out to be the way a sunbeam lit one of the curtains.

JONATHAN MABERRY: Kind of points to the emergence of a powerful imagination. Apart from the house, what else triggered your childhood fears?

HOLLY BLACK: When I was really little, Mom told me that DRACULA was the most frightening book she’d ever read. She described the way the vampire had crawled down the wall, head first and it creeped me out so much that I turned a bunch of my Barbie and Ken dolls into “good vampires” so they could protect me from the bad ones that I believed were out there.

JONATHAN MABERRY: Smart. I did that with my GI Joes.

HOLLY BLACK: Also, I believed that the trees were going to snatch me up in their long branches like the trees in the Green Knowe books. Remember those?

JONATHAN MABERRY: Oh, yeah. Lucy Boston wrote them and her son, Peter, illustrated them. Very creepy. THE CHIMNEYS OF GREEN KNOWE came out in 1958, the year I was born. My grandmother bought a copy and put it away to give me when I was old enough to read. Scared the hell out of me. So, yes, I remember those.

JONATHAN MABERRY: Um, you aren’t supposed to say that. You just gave me chills.

HOLLY BLACK: Yeah, that scared me too. In fact, I didn’t even have to look that poem up; it is lodged in my brain forever. So yeah, that’s me: easily scared.

JONATHAN MABERRY: Do you think we need to protect our kids from books that are too frightening?

JONATHAN MABERRY: What’s your take on it?

HOLLY BLACK: I have read some awful books — and sometimes I put them down and sometimes I read them all the way through– but no matter how much they upset me while I was reading them or how much they should have upset me, I was never harmed by the experience. I believe books give us the opportunity to try on someone else’s life, to be someone else, and, ideally, to learn how to empathize with different people in different circumstances than our own.

JONATHAN MABERRY: Is there value, then, in reading horror?

HOLLY BLACK: There are many useful things to take away from horror. We have an intense experience with no risk to ourselves at all. We experience catharsis. We are scared, but we survive being scared. I think those things are good for all of us, but I think they have a special appeal for teenagers.

JONATHAN MABERRY: What is ‘horror’, as you see it?

HOLLY BLACK: I think horror is an exploration of the shadows. And I believe that it creates a visceral feeling, a shivering up the spine, hair standing up along the arms. It gets to the gut as well as the head.

JONATHAN MABERRY: Rumor has it you have two teen horror books scheduled for this year. What’s up first?

HOLLY BLACK: The first one is a middle grade, called DOLL BONES about three kids — Jack, Poppy and Alice — who go on a road trip to bury a doll that may or may not be haunted, but definitely needs to be put to rest. It’s half ghost story and half about the time in one’s life when everything and everyone is forcing you to grow up, but you’re not ready to leave everything you loved and everything you were behind. That comes out May 7th.

JONATHAN MABERRY: Creepy. Dolls in general are creepy, and creepy doll stories doubly so. What’s after that?

HOLLY BLACK: The second one is a teen novel. THE COLDEST GIRL IN COLDTOWN is set in a world where monsters, mostly locked away in walled Coldtowns, have become famous via video feeds. One day, Tana Bach wakes up the morning after a party, having passed out in a bathtub while avoiding her charming ex-boyfriend, to find almost all the other partygoers dead, their throats ripped out by monsters. She could be infected herself. She has to go on a road trip through the night with her aforementioned ex, who is raging with infection and thirsty for blood, and one other person — the first monster she’s ever met who hasn’t been on the other side of a TV or computer screen. Tana has had the world presented to her one way, but being among the monsters, is very, very different.

HOLLY BLACK: THE COLDEST GIRL IN COLDTOWN is full of stuff I love – messy, messed up stuff. But it’s mostly about a girl, who, as the media lays her out before others like a feast of disaster, is discovering her inner monstrousness and learning to appreciate it.

JONATHAN MABERRY: Anything else scheduled after that?

HOLLY BLACK: For me? I’m not sure. I am working on a faerie book called THE DARKEST PART OF THE FOREST and I am really excited about it.

JONATHAN MABERRY: Is it horror?

HOLLY BLACK: It definitely has horrific elements, but I am still trying to work out more details. And I am co-writing a middle grade with Cassandra Clare. The first book is going to be called THE IRON TRIAL and it’s a magic school book with an extra heaping of darkness. I’m interested in joining horror elements with fantasy ones and I am hoping to push myself to explore all the things that scare me, of which, as we’ve established, there’s a lot.

JONATHAN MABERRY: If you had to recommend just three YA horror novels –past or present—which books make your must-read list?

HOLLY BLACK: My first pick would be Neil Gaiman’s THE GRAVEYARD BOOK, which is brilliant and beautifully written and opens from the point of view of a knife. That’s right, a knife! Which is being used to kill people! It’s awesome. I’m a long time fan of Gaiman’s and this might be my favorite of his books.

JONATHAN MABERRY: I talked with Neil about that at the Baker Street Irregulars dinner a year or so ago. He said he wrote that book for his adult readers and was surprised to learn that he’d written a Middle Grade book. What’s your second pick?

HOLLY BLACK: The second would be I HUNT KILLERS by Barry Lyga, in which the teenage son of a serial killer and explores his own inner darkness and uses what his father taught him about “prospecting” to find other killers. Lyga exploits all the holes and contradictions in the research on serial killers to create finely drawn characters that feel shudderingly real.

JONATHAN MABERRY: Agreed. I interviewed Barry a few weeks ago. Heckuva writer, heckuva good guy.  And your other pick?

HOLLY BLACK: And the third would be Robin Wasserman’s forthcoming THE WAKING DARK, which is a bad town novel, a la Stephen King, but also lyrical, adrenaline-soaked and amazing. Wasserman weaves together multiple storylines expertly to create a terrifying portrait of a community falling apart.

JONATHAN MABERRY: I’ll make sure I grab a copy. And thanks for stopping by, Holly. Best of luck with the new books!

Find Holy online at her website at blackholly.com and her tumblr at hollyblack.tumblr.com.

Tune in next week when my guest will be Charlie Higson, one of the top teen horror writers in the UK. Author of the Young James Bond books as well as the deeply creepy THE ENEMY and its sequels. Until then, don’t forget to say the monster words before you turn off the light. Otherwise they’ll get you while you sleep!