A Chat with Kami Garcia

Welcome back to SCARY OUT THERE!

This week I sit down to have a chat with Kami Garcia, the #1 New York Times & international bestselling coauthor of the Beautiful Creatures Series and the author of Unbreakable, the first book in the Legion Series, releasing on October 1, 2013. Kami is fascinated by the paranormal, and she’s very superstitious. When she isn’t writing, she can usually be found watching disaster movies, listening to Soundgarden, or drinking Diet Coke. She lives in Maryland with her family, and their dogs Spike and Oz (named after characters from Buffy the Vampire Slayer).

JONATHAN MABERRY: Let’s jump in with the big question –what scares Kami Garcia?

KAMI GARCIA: The big ones are my children being harmed in any way, and my husband getting sick or dying.

KAMI GARCIA: If you’re talking smaller fears, how much time do you have?

JONATHAN MABERRY: Give me your top terrors.

KAMI GARCIA: I’m incredibly superstitious, so there are a lot of things that scare me: ghosts, heights, snakes, sharks, drowning, suffocating, demonic possession, and being buried alive.

KAMI GARCIA: Not necessarily in that order.

JONATHAN MABERRY: How is ‘fear’ different as an adult than when you were a teen?

KAMI GARCIA: As a teen, I was afraid of the types of situations we often see in horror movies: the girl walking at night in the dark, who suddenly realizes she is being followed; realizing there is someone else in the house when you’re supposed to be home alone.

KAMI GARCIA: The Silence of the Lambs kidnapping and bucket of lotion scenario.

JONATHAN MABERRY: Want to take a swing at a definition of ‘horror’?

KAMI GARCIA: Horror is feeling completely helpless in the face of something (or someone) violent, disturbing, or terrifying. It’s the feeling that is beyond fear.

JONATHAN MABERRY: Should we, as some people suggest, ban books that are too intense for kids?

KAMI GARCIA: As a former teacher, I don’t believe books are dangerous.

JONATHAN MABERRY: So, what is dangerous?

JONATHAN MABERRY: Should limitations be imposed on what kids read?

KAMI GARCIA: If parents want to set limits on what they allow their children read, that’s their choice (though telling teens they can’t do something usually makes them want to do it more). But I don’t support censorship. No one has the right to decide what authors can and cannot write.

KAMI GARCIA: An unknown or unpredictable element and pacing that gives you just enough time to catch your breath, before the story scares the hell out of you again.

JONATHAN MABERRY: What is it about being afraid that appeals to people?

JONATHAN MABERRY: How so? 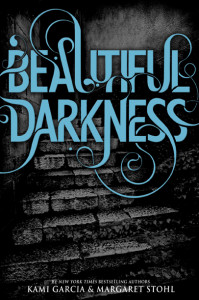 KAMI GARCIA: It’s a response to mortality. We want to experience something frightening, because we know that after we close the book, leave the movie theater, or get off the roller coaster, it’s over. We survived it.

JONATHAN MABERRY: Tell us about your YA horror novels. Talk about UNBREAKABLE.

KAMI GARCIA: Unbreakable is first book in my new solo series, the Legion, which hits stores on October 1st. It’s the story of Kennedy Waters, an ordinary girl who comes home one night and finds her mother dead. Kennedy doesn’t know that paranormal forces are responsible until she is attacked by a vengeance spirit, and saved by identical twins Jared & Lukas Lockhart. Kennedy learns that her mom was a member of a secret society of ghost hunters. Now Kennedy has to take her mother’s place and join the next generation of the Legion—four misfit teens with unique skills—if she wants to stay alive. Throw in a demon, supernatural weapons, suspense, romance, and real haunted locations in the United States, and you have Unbreakable.

JONATHAN MABERRY: Sweet. And after that?

KAMI GARCIA: Right now, I’m working on the sequel to Unbreakable. I’m also going to have a short story in the anthology Midian Unmade: Tales of Clive Barker’s Nightbreed, which is an honor.

JONATHAN MABERRY: I was invited to write something for that, too. Barker rocks.

JONATHAN MABERRY: Help us build our must-have YA shelf. What would you put on it?

JONATHAN MABERRY: Love it. What else?

JONATHAN MABERRY: Not technically a YA, but there was no YA category when it came out. And a third to round us off?

KAMI GARCIA: Your YA horror novel, Rot & Ruin, is also one of my favorites. Am I allowed to say that?

JONATHAN MABERRY: Why yes, I believe you are. Thanks, Kami!

Join us next week for a special entry of BIG SCARY BLOG. I’ll be presenting some samples of horror writing from young teens.

Jonathan Maberry is a NY Times bestselling author, writing teacher and comic book writer. His latest novel is FIRE & ASH, the final book in the multiple-Bram Stoker Award winning ROT & RUIN series. www.jonathanmaberry.com Find him on Twitters at @JonathanMaberry and on Facebook at www.facebook.com/jonathanmaberry