A Chat with Kendare Blake 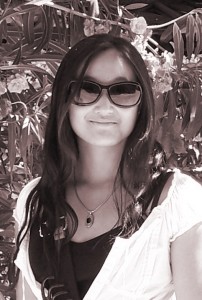 JONATHAN MABERRY: Welcome aboard, Kendare. Let’s jump right to the big question upon which Scary Out There is built. What scares you?

JONATHAN MABERRY: How so–?

KENDARE BLAKE: It’s a fairly universal human fear, and it scared me as a teen, too.

JONATHAN MABERRY: Anything else?

KENDARE BLAKE: Also, zombies. And that old preacher guy from Poltergeist II. I’d like to think that I’ll never lose the link to my childhood fears.

JONATHAN MABERRY: Except now you channel that into your fiction and scare the bejeezus out of teenagers.

JONATHAN MABERRY: Where do you stand on the debate as to whether horror fiction is too intense for teens?

JONATHAN MABERRY: All the time?

KENDARE BLAKE: All the time. Heartily.

JONATHAN MABERRY: What about extreme horror?

JONATHAN MABERRY: Do you have a practical definition for ‘horror’?

JONATHAN MABERRY: Is there only one kind of horror?

KENDARE BLAKE: No, it doesn’t have to be monsters tearing people apart, or psychos slicing folks up the middle, though both of those are nice. It can be as subtle as a lake with no bottom, as quiet as a girl who may or may not have poisoned her dog.

JONATHAN MABERRY: How does that play out in your own books?

KENDARE BLAKE: Anna Dressed in Blood and Girl of Nightmares tell the story of Cas Lowood, a young ghost hunter who goes up against Anna, the strongest ghost he’s ever seen. And she wipes the floor with him. Lucky for him, the two form a connection, and she becomes the catalyst for a journey of discovery about the magic knife he wields, and the terrible specter who murdered his father. 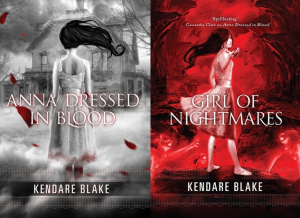 JONATHAN MABERRY: They’re terrific books, too. I remember grabbing ANNA DRESSED IN BLOOD based on the recommendation of one of my teen writing students. I browsed a couple of pages at the book store and by the time I took it to the register I was four chapters deep. And I heard a rumor about it being optioned?

JONATHAN MABERRY: Nice!  Best of luck with it! So…what’s next?

KENDARE BLAKE: Next up is something that is perhaps less horror. It’s called ANTIGODDESS, and it features dying Greek gods in contemporary America and the reincarnated heroes who get caught in their war.

JONATHAN MABERRY: That’s a book I had the pleasure of reading for a cover blurb. I devoured it. I believe my blurb said: ‘ANTIGODDESS is a riveting and chilling horror thriller that deftly blends ancient legends with modern horrors. Highly recommended.’ And I stand by that statement. It’s a killer of a book, though not straight horror.

KENDARE BLAKE: There are horrifying elements to it, lots of blood and disturbing imagery, but it’s more of a thriller, or hero’s quest than straight horror.

JONATHAN MABERRY: If you had to recommend just three YA horror novels –past or present—which books make your must-read list? 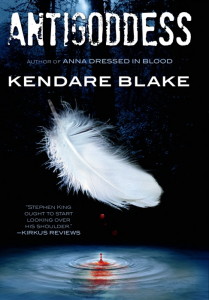 JONATHAN MABERRY: Yeah, that seems to be a running theme when I ask that question.

KENDARE BLAKE: I tend to think that horror as a genre can be read by any reader at any level at any time. So these won’t necessarily be categorized as YA, but I think young adults would like them anyway.

JONATHAN MABERRY: Fair enough. Hit me with your first pick.

KENDARE BLAKE:  It’s a classic: Shirley Jackson’s WE HAVE ALWAYS LIVED IN THE CASTLE, a magical, whimsical, disturbing stories about a pair of sisters whose entire family was murdered.

KENDARE BLAKE:  Next, Stephen King’s IT, because it’s a big, fat popcorn bucket of horror tropes.

JONATHAN MABERRY: No joke. It stands up well to re-reads, too. And third–?

KENDARE BLAKE: Joe Hill’s NOS4A2, even though I haven’t finished it. If you’re into horror and you haven’t read him, you’re missing out.

JONATHAN MABERRY: Joe’s a great guy and a friend of the Horror Writers Association. Hell of a writer. Well, Kendare, thanks for swinging by for a chat. Best of luck with your books, and we’ll see you ‘round the cemetery.

Visit Kendare’s blog, on find her onTwitter @KendareBlake and Facebook.

SPECIAL NOTICE: The Bram Stoker Awards will be announced this week (Saturday night!) at the Horror Writers Association banquet at the World Horror Convention in New Orleans. Here’s a link to the live webcast: http://www.horror.org/blog/?p=3952

And here are the finalists in the Young Adult Category: