My guest this week is Melissa de la Cruz is the New York Times and USA Today best-selling author of a slew of critically acclaimed and award-winning novels for teens including the BLUE BLOODS series, The AU PAIR series, The ASHLEYS series, Angels on Sunset Boulevard, Girl Stays in the Picture, and the Witches of East End series. She has worked as a fashion and beauty editor and has written for dozens of publications including The New York Times, Marie Claire, Harper’s Bazaar, Glamour, Cosmopolitan, Allure, The San Francisco Chronicle, McSweeney’s, Teen Vogue, CosmoGirl! and Seventeen. Melissa lives in Los Angeles and Palm Springs with her family.

JONATHAN MABERRY: What scares you, Melissa? How is that different as an adult from what scared you as a teen?

MELISSA DE LA CRUZ:  Now that I’m a grown-up and a mom, what scares me most is any violence or harm coming to children, particularly my own child.

JONATHAN MABERRY: Yeah…as a parent, too, I understand those fears. Anything else give you shivers?

JONATHAN MABERRY: Has that always been a thing for you?

MELISSA DE LA CRUZ:  No. My dad died at 60, so nowadays I’m scared of dying that young, or losing my close family. 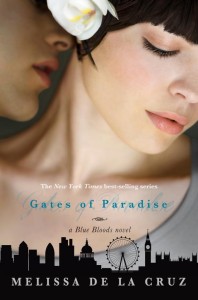 JONATHAN MABERRY: I know. I’m 55 now and my dad died at 65. Mortality is no longer an abstract concept. If these are recent fears, what scared you as a kid?

MELISSA DE LA CRUZ:  When I was a teen I was very frightened of vampires and ghosts.

MELISSA DE LA CRUZ:  Because they felt very real to me, I completely believed in the existence of the supernatural. Also, serial killers. I moved to America from the Philippines in 1985 and we moved to San Francisco where the “Night Stalker” was breaking into homes and killing people. I was convinced one night that the Night Stalker was in our house.

JONATHAN MABERRY: Here on Scary Out There we’ve been talking about the controversy of censorship in horror fiction. Some people have been saying that we shouldn’t expose kids to scary concepts. Agree or disagree.

MELISSA DE LA CRUZ:  Both. I disagree because of course teens know the world is a scary place. I mean, hello, high school is the scariest place on earth! So whatever we write in fiction is not even as scary as real life, with bullies and mean girls and the soul-destroying reality that’s out there. 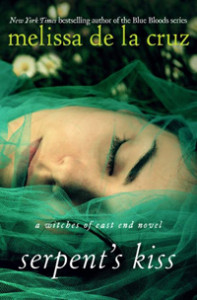 MELISSA DE LA CRUZ: I think I would agree it’s not appropriate if it is too graphic, or too twisted, and read by a child at too young an age. I would say I have been scarred for life by reading a Stephen King novel that had a pedophile dad, it jus scared the crap out of me, to think that someone could be that awful to his children. I still shudder when I think about it. I think I read it at 14 or so. But who’s to say I wouldn’t be scarred from having read it as an adult either. King described the boy’s terror so well, it’s never really left me.

JONATHAN MABERRY: And yet that’s a real world thing. There are pedophiles out there and, sadly, some of them are fathers. But it’s not vampires and ghosts. Are real world horrors part of your definition of ‘horror fiction’?

MELISSA DE LA CRUZ:  I would say anything that gets your pulse pounding, with a paranormal element – vampires, zombies, ghosts. Blood and gore and the supernatural equal horror.

JONATHAN MABERRY: And you put these elements into your own work…?

MELISSA DE LA CRUZ:  When I first wrote BLUE BLOODS I did want an aspect of horror in it, so I created the ‘silver bloods’ – vampires who feed on other vampires. I wanted something that would scare my characters (who were vampires) and my readers as well.

JONATHAN MABERRY: Does horror continue to be an element in your books?

MELISSA DE LA CRUZ:  My new series is more in the fantasy vein, it’s “Lord of the Rings” in reverse, in that magic is coming back into the world instead of leaving it. The series is called HEART OF DREAD and the first book is FROZEN and comes out Sept 17, 2013. There are elements of horror and gore in it.

JONATHAN MABERRY: Earlier you mentioned Stephen King and how one of his books impacted your life? Do you ever recommend that teens read King?

MELISSA DE LA CRUZ:  Sure. Stephen King’s ‘Salems Lot.  That book kept me up at night, I was convinced there was a vampire floating outside my window.

JONATHAN MABERRY: Steve King isn’t a YA writer per se, though.

MELISSA DE LA CRUZ:  I would consider him a YA writer before YA was born because when I was a teenager all I read was Stephen King. Many of Stephen King’s stories had high school kids in them like this one.

JONATHAN MABERRY: Can you suggest any other authors whose work is aimed at adults but which you might recommend for teens?

JONATHAN MABERRY: Why that one?

MELISSA DE LA CRUZ:  It’s a serial killer story with an elegant and sad YA love story in the middle of it. Wonderful.

JONATHAN MABERRY: Anything else? 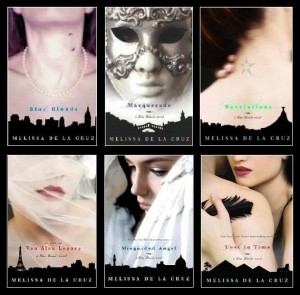 MELISSA DE LA CRUZ:  Max Brooks’ WORLD WAR Z.  It’s one of the best zombie novels of all time. Amazing and so realistic. You can imagine it happening, which is the scariest part but also incredibly well-written.

Melissa is easy to find on the Net: Visit her website: http://melissa-delacruz.com; or find her on your favorite social media platforms:

Join me next week when my guest will be Gretchen McNeil, author of the critically-acclaimed POSSESS, GET EVEN, and TEN.  Until then… don’t talk to strangers (unless you’re stranger than they are!)