A Chat with Rachel Caine

Welcome back to SCARY OUT THERE, the Horror Writers Association’s new blog on scary fiction for teens. This week I sit down for a chat with Rachel Caine the #1 internationally bestselling author of more than forty novels, including the bestselling Morganville Vampires series, the Weather Warden series, the Outcast Season series, and the new upcoming Revivalist series. She was born at White Sands Missile Range, which people who know her say explains a lot. She has been an accountant, a professional musician, and an insurance investigator, and until very recently continued to carry on a secret identity in the corporate world. She and her husband, fantasy artist R. Cat Conrad, live in Texas. 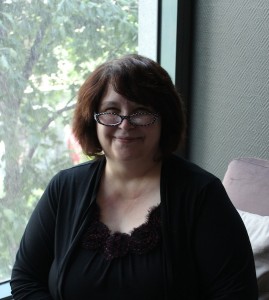 JONATHAN MABERRY: Hey, Rachel. Before we get started…that a pen name or–?

RACHEL CAINE: It’s a pen name. My first four novels came out under my real name, Roxanne Longstreet, and they were all straight-up horror.

JONATHAN MABERRY: And under that name you’re best known for YA?

JONATHAN MABERRY: Which is a wonderful ongoing series. Book fourteen comes out this year?

RACHEL CAINE:  Book #14 –FALL OF NIGHT came out in May, and book and book #15, DAYLIGHTERS, debuts November 5.

JONATHAN MABERRY: That’s a lot of supernatural spookiness. Did the unseen world scare you as a kid? Is that why you write about it?

RACHEL CAINE: I think as a teen I was more terrified of the visual … gross things, sick things. Finding a dead body, that kind of thing. I was always existentially afraid of the unknown monster in the closet, but I don’t think I connected with psychological horror quite as well until two things happened to change that. 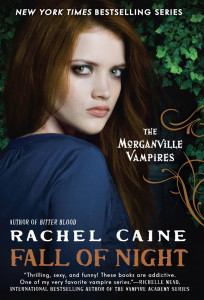 JONATHAN MABERRY: Which are?

RACHEL CAINE: First, I read ‘Salems Lot by Stephen King, and discovered that the scariest parts of that book had to do with people simply being in denial, unable to admit what had happened.

JONATHAN MABERRY: Did any particular scenes stand out for you?

RACHEL CAINE: The scene that stayed with me in a horrifying, gut-wrenching way was a mother trying to feed her vampire-drained baby, simply unable to accept that he was dead, and trying to feed him his baby food. Creepy, horrible, and sad.

JONATHAN MABERRY: Great, thanks…I’d managed to forget that. Now it’ll be in my head again. What as the second thing?

RACHEL CAINE: When I discovered Shirley Jackson’s The Haunting of Hill House, which to this day is my high water mark for terrifying fiction.

JONATHAN MABERRY: I absolutely agree with that.

RACHEL CAINE: It isn’t so much about ghosts and haunting as it is about being haunted … about the events in your own life that make you vulnerable and prey for either madness or the supernatural, or both. Plus, Shirley’s writing opened up my eyes to how language itself defines and evokes emotion.

JONATHAN MABERRY: So literary horrors are what scare you?

RACHEL CAINE: Well, to be fair, I still even now get jumpy over “dark rides” at carnivals, and I am constitutionally unable to walk through a Halloween haunted house. I can work it. I can’t experience it. I think that’s been true ever since I was a little kid.

JONATHAN MABERRY: Those things are often meant to scare the bejeezus out of us, and kids are usually the focus. Do you think there should be limits imposed on the kinds or levels of horror we writers put in teen fiction?

RACHEL CAINE: I don’t worry so much about the teens as I do about the critics.

RACHEL CAINE: Seriously, did they never sit around a fire and tell scary stories to each other? Did they never hear about THE CLAW? Did they never dare each other to walk up to the scary house, and spread stories about the psycho cannibal living inside it? I think they did. I think they’ve either forgotten or willfully ignored the fact that they didn’t grow up protected from scary stories. (And it they were: DUDE, YOU GUYS ARE NOT NORMAL. Understand that. Embrace it.) 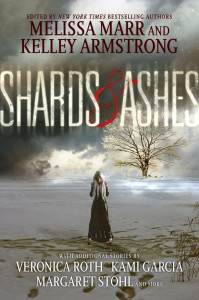 JONATHAN MABERRY: Right on. So horror is a part of the real world experience?

RACHEL CAINE: Sure. Teens especially are coming of age into a world that is media-blitzed with terrifying news and images, and they’re asked to somehow make sense of it all. There are fewer and fewer stories of heroism in the news, and more stories of people who do bad things, or at least not-good things, because that simply plays better on TV.

JONATHAN MABERRY: How does horror fit into that equation?

RACHEL CAINE: By contract, horror and scary stories are morality plays, in a certain sense … we generally have a heroic central figure or group that is battling evil, and trying to do good. They may slip, they may make mistakes, but they face overwhelming odds and terrifying situations and they handle them.

JONATHAN MABERRY: You’re building a case for horror as a positive force.

RACHEL CAINE: Horror, perversely enough, gives hope. It gives me much more hope than a contemporary real-life story in which everyone is shades of gray, everyone is selfish and petty, and ultimately it’s all pointless. I’d rather read a hundred horror novels with a point, than one story that teaches me nothing except to expect disappointment.

RACHEL CAINE: Having said all that, I think that horror CAN cross a line. The problem is, the line is different for every person, and it’s based on life experience and temperament … so you can’t make an arbitrary rule that says “You can’t do this.”

JONATHAN MABERRY: Can a writer set his or her own personal limits?

RACHEL CAINE: Maybe you can. Maybe your audience is smaller for it, but you can, and maybe you should. As an author, that’s your social contract with yourself … are you doing something with this book you can stand behind? Or are you just doing it to see how gross you can be, like a 10-year-old showoff? Because that last thing probably isn’t the right motive.

JONATHAN MABERRY: That contact seems to be pretty far reaching. Do you see it as something that covers all of ‘horror’?

RACHEL CAINE: I don’t, because I think the genre has been distributed among a lot of other areas. There’s not much of a “horror” section in the stores anymore. You can look in SF/F, Romance, Mystery, and (of course) YA for it, and especially in General Fiction, but it won’t usually be sold as straight horror.

RACHEL CAINE: My personal definition is a story in which the horrific elements make up the majority of the tale. Stephen King’s ‘Salems Lot, despite the interaction of the characters, is overwhelmingly covered by a sense of dread and danger, so: horror. Whereas a vampire story in the Romance section is probably not horror at all … just using horror tropes. But as with all definitions, your mileage will vary.

JONATHAN MABERRY: Is horror fiction the same for teens and adults?

RACHEL CAINE: I think adult horror doesn’t have to have much of a point, generally. It is usually does because that’s pretty good storytelling, but it can be more of a “tone poem” that just evokes emotion (and that’s all horror is … an emotion). Teens seem to prefer more structure, and especially need more sympathetic characters to ground them in a story. (Most adults do too, though.) I think you’ll see less overtly horrific detail in teen fiction, but that doesn’t make the horror any less effective, to my mind.

JONATHAN MABERRY: Let’s shift focus from general to specific and talk about your own horror stories. What’s the lowdown on them?

RACHEL CAINE: Mine stand on that line between adventure and horror — like Buffy, if that’s not too presumptuous a thing to say. Actually it is, but someday I hope to grow up to be Joss Whedon’s very inadequate cousin, or something.

JONATHAN MABERRY: A lot of us want to make that claim.

RACHEL CAINE: The Morganville Vampires series features a young protagonist, Claire, who finds her life-change to college is more life-threatening when she discovers that the small, isolated Texas town is run by vampires, who own everyone and everything. Unless she signs agreements with a vampire Protector, or finds friends to watch her back, she’s dead. Even with her new friends and allies — Shane, Eve and Michael, all living in the Glass House — every day in Morganville is a new adventure in danger, whether from the vampires, humans, or other things drawn to the chaos.

JONATHAN MABERRY: That would crush a lot of people.

RACHEL CAINE: Yeah, but Claire’s a fighter, and if anybody can survive four years of college in Vampire Central … it’s her.

JONATHAN MABERRY: What’s next for you in YA horror?

RACHEL CAINE: I’m working on something that’s sort of a strange hybrid between epic fantasy and horror, but I think it might come down more on the side of epic fantasy. So I don’t know. I can’t rule out wandering over the line again, though, since horror is truly one of my favorite genres.

JONATHAN MABERRY: Which YA books make your must-read list?

RACHEL CAINE: TOUGH! Okay, I’ll give it a whirl … The Forest of Hands and Teeth, Carrie Ryan; Wicked Lovely, Melissa Marr; Project 17, Laurie Faria Stolarz … although there are SO MANY I could recommend! SO MANY! Seriously, guys, get out there. It’s a book feast just waiting for you.

JONATHAN MABERRY: Terrific. Thanks so much, Rachel.

NEXT TIME on SCARY OUT THERE I’ll be chatting with Kami Garcia, author of the wildly popular Beautiful Creatures.

Until then…don’t take candy from strangers. Give it to them instead. It freaks them out.

Jonathan Maberry is a NY Times bestselling author, writing teacher and comic book writer. His latest novel is FIRE & ASH, the final book in the multiple-Bram Stoker Award winning ROT & RUIN series. www.jonathanmaberry.com Find him on Twitters at @JonathanMaberry and on Facebook at www.facebook.com/jonathanmaberry