A Chat with Tonya Hurley

My guest this week is Tonya Hurley the New York Times and international bestselling author of the GHOSTGIRL young adult series and author of THE BLESSED.  Tonya has also created video games, two television series, written for film and is a contributor to The Huffington Post.  She lives in New York with her husband and daughter.

JONATHAN MABERRY: Let’s jump right in and talk about. With Scary Out There we’ve been exploring that nature of fear and what makes each of us afraid. What scares you, Tonya?

TONYA HURLEY: I’ve always been terrified of death, since I was a little girl.

JONATHAN MABERRY: There are a lot of ways to die. Is there a particular kind of death that pushes your buttons?

TONYA HURLEY: Death from the inside, like an undetected aneurysm, a sudden heart attack, an incurable acute illness, or anything that occurs without warning.

JONATHAN MABERRY: Was there something that ignited that fear in you?

TONYA HURLEY:  Yes. I remember being a little girl in the shower and screaming for my mother that my eyes were falling out of their sockets.

TONYA HURLEY: I was a terribly morbid child.

JONATHAN MABERRY:  No kidding. Does anything else scare the bejeezus out of you?

TONYA HURLEY: Sure, possession.  The idea of losing control was a big one with me.

JONATHAN MABERRY:  In what way?

TONYA HURLEY: The “monsters” inside. This is probably the same reason I am drawn to writing young adult.  There is so much going on inside mentally, emotionally, hormonally when you’re a teen that you have absolutely no control over.  It’s the best of times and the worst of times. 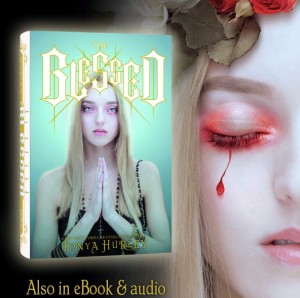 JONATHAN MABERRY: That speaks to a recurring topic here on Scary Out There. Some critics have voiced concerns about scary stories for teens, suggesting that they’re bad for kids. Do you agree with that view?

TONYA HURLEY: No, I don’t agree with the concerns.

JONATHAN MABERRY:  Why not?

TONYA HURLEY: Scary stories can often be our best teachers, especially when we are young.  They help us to understand the actual horror in the world and how to process and deal with it. I think that is one of the reasons why the fairytales of childhood are so brutal.  They are all just cautionary tales to one degree or another. Not to mention they are incredibly entertaining and they get teens reading.

TONYA HURLEY: I define ‘horror fiction’ simply as a story that scares you.

JONATHAN MABERRY: Is that an across-the-board view?

TONYA HURLEY: In a way. Everyone has a different fear threshold, so I don’t think we can limit it to tales of ghosts, monsters, real or imagined, and the supernatural.  Growing up, some of the most frightening stories I ever heard, and horrific images I ever saw, were in church on Sunday. My favorite horror fiction books mix horror with heart and humor.

JONATHAN MABERRY: Where you influenced by teen horror fiction?

TONYA HURLEY: Absolutely.  CARRIE by Stephen King is why I do what I do.  I read it when I was young.

TONYA HURLEY: I think it’s the first YA novel before they were classified as such. All the elements are there.  High school, teenagers, peer pressure, parental conflict, fitting in, bullying, buckets of blood, sex, mayhem, murder and of course the supernatural.  It has influenced my work greatly.

JONATHAN MABERRY: As you see it, is horror fiction different for adults and for teens?

TONYA HURLEY: I don’t think it needs to be although you do want to take into account how graphic you can be without turning a younger reader off completely.  Teen readers perhaps react and relate more to characters like themselves and prefer to see those characters in familiar situations, i.e., high school, summer camp, because their life experiences are necessarily more limited than an adult’s.  But I don’t think the essence of what frightens us – the unknown – ever really changes.

JONATHAN MABERRY: Apart from an influence of CARRIE, what drew you to write horror?

TONYA HURLEY: I never set out consciously to write YA horror. I set out to write a trilogy that reimagined the martyr stories through three modern, confused but ultimately empowered, female characters who were chock full of badassery.  What I didn’t fully appreciate was how frightening those legends could be once I’d dragged them out of the past and into the present. 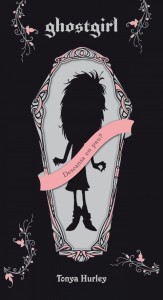 TONYA HURLEY: The Blessed is the story of three Brooklyn teens at the lowest point in their lives, who fall for a mysterious guy who believes they are the modern-day incarnation of ancient female martyrs Lucy, Cecilia and Agnes.  Those saints died horrific, brutal and bloody deaths at very young ages as punishment for their defiance, so to stay true to those legends I really had to go there with my story and these characters and make no apologies.

JONATHAN MABERRY: Pretty intense stuff.  Kind of suggests that we’ve had horrific stories for teens for a long time.

JONATHAN MABERRY: That’s one hell of a tagline. So, what’s next?

JONATHAN MABERRY: When will we see them?

TONYA HURLEY: The first paperback ,PRECIOUS BLOOD, will be released June 25th. The second book, PASSIONARIES, will be released early 2014.  Aside from that, I am working on a ghostgirl ‘Day Of the Dead’ novella.

JONATHAN MABERRY: Nice!  Okay, apart from CARRIE, hit me with a couple of other YA horror novels that you feel are must-reads.

TONYA HURLEY: I’m not sure if these qualify as ‘YA horror’ since they pre-date the genre, but they are nevertheless scary as hell and shaped me as a person while I was coming of age, and certainly as a writer.  Kickin’ it classic with The Exorcist by William Peter Blatty. As frightening and memorable as the film was (and still is), you haven’t truly been scared out of your wits until you read it.

JONATHAN MABERRY: Why so?

TONYA HURLEY: Is there anything more horrifying than being taken over by an evil spirit? For many of us raised Catholic, this is not a fantasy but a distinct possibility and gives the story even greater power over the imagination. The slow roll out of the story requires patience but somehow makes the whole thing more unsettling.  I had to hide the book before I went to bed each night so I couldn’t see it!

JONATHAN MABERRY: And what else?

TONYA HURLEY: Frankenstein by Mary Shelley.  It always comes back to this one somehow. We all know the big themes addressed and the cultural impact they’ve had over the years but at the core of its horrific plot is a mad scientist turned grave robber who lives to stitch together parts of corpses and reanimate them.  The stuff of nightmares.

JONATHAN MABERRY: Yes it is. Thanks for swinging by to open a vein for us, Tonya. Best of luck with THE BLESSED novels!

Also, here’s a trailer for BLESSED trailer on EW / also on youtube if you prefer:

NEXT TIME: Tune in next week when I sit down to talk with Darren Shan, internationally bestselling authors of thirty novels for teens (and adults), Cirque Du Freak, The Demonata, The City trilogy, and his new series Zom-B.  Until then, hurry home before it gets too dark!

Jonathan Maberry is a NY Times bestselling author, multiple Bram Stoker Award winner, and freelancer for Marvel Comics. His novels include EXTINCTION MACHINE, FIRE & ASH, PATIENT ZERO and many others. His award-winning teen novel, ROT & RUIN, is now in development for film. He is the editor of V-WARS, an award-winning vampire anthology. Since 1978 he’s sold more than 1200 magazine feature articles, 3000 columns, plays, greeting cards, song lyrics, and poetry. He is the founder of the Writers Coffeehouse, and co-founder of The Liars Club. Jonathan lives in Bucks County, Pennsylvania with his wife, Sara Jo. www.jonathanmaberry.com   Find him on Twitters at @JonathanMaberry and on Facebook at www.facebook.com/jonathanmaberry